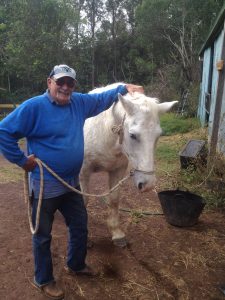 Jimbo’s gait was so affected by fibrotic myopathy that he looked very awkward, even in a walk. He wasn’t able to trot, and his canter was far from normal. The Percheron / Warmblood gelding’s owner, Pomona Pony Club Instructor Pete Deumont, contacted me after his vet diagnosed fibrotic myopathy in Jimbo’s offside hind leg. This is a condition whereby scar tissue forms in the large muscles on the back of the thigh (hamstrings).

Fibrotic myopathy usually results from injury or extreme extension of the muscles. A ‘bullet-like’ hard area can be felt in the affected muscle. It affects the gait because the shortened muscle pulls the foot back during the stride, causing a jerking movement and slapping down of the foot onto the ground.

After his first acupuncture treatment, Jimbo’s walk had improved, so there was less of a pronounced ‘slap’ of the foot and a little more reach forward. After a series of acupuncture treatments, the ‘bullet-like’ scar tissue cannot be felt, and his walk is almost normal. He can now canter down hill again, and is moving much more freely.

Jimbo and Pete are old friends, and the affection they have for each other is obvious. Pete’s aim in hiring me was to make Jimbo more comfortable, but the improvement is so great he’s planning on riding again.

Pete said “He couldn’t trot before, and now he can, and his canter is more normal. He always used to be last up for feed (in a herd of eight) and now he’s not. I’ll be riding him again.” 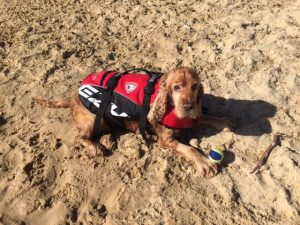 Cocker spaniel with hind limb paralysis, and suspected disc protrusion based on MRI. Before first acupuncture treatment, Fifi had no use of hind legs, and was dragging herself along with front legs.

Fifi started making progress after the first treatment, and after three treatments she was walking, and met me at the door when I arrived! She had acupuncture and electro acupuncture, and made a full recovery.

After the second electro acupuncture session, her owner, Sarah Murray, said that “she is running and can jump up onto the couch”. This was such a great outcome for an adorable little dog.

In Chinese medicine, equine athletes are prone to EIPH because they are exposed to several sources of internal heat, which leads to EIPH. Strenuous physical competition, the living conditions of most racehorses, and stress can all generate heat.

When the EIPH is no longer clinically present, and the living conditions have changed, stress can remain a factor. Jimmy seemed a little subdued and shut down, despite loving care from Selena.

Scars are also considered important in acupuncture, as they can block the free flow of energy along the channels on which they are located.

Jimmy also showed some signs of pain in the hindquarters.

After acupuncture treatment, Jimmy was no longer showing signs of muscular pain, and was much more ‘present’ and calm.

Emotions are considered major causes of physical problems in Chinese medicine. When we treat all aspects of the horse, the effects can be surprising.

When I spoke to Selena recently, she said “he’s doing really well. He’s a different horse lately – so chilled out. The acupuncture did him the world of good, and seemed to release something in him.”

Judy Christianson of Carters Ridge had a horse that had been diagnosed with anhidrosis (inability to sweat). The condition usually appears in horses that sweat for long periods in hot, humid conditions, or in horses that have moved from a cold climate to a hotter more humid one. The horse’s system of thermoregulation shuts off, resulting in dangerous overheating if the horse exerts itself in hot weather.Some anhidrotic horses can sweat a small amount under the mane or saddle, but don’t sweat normally. There is no proven treatment in allopathic medicine.

When Judy rode Cormac after those three treatments, he was sweating normally once again, and in places where he had ceased to sweat prior to acupuncture. I was thrilled to hear that Cormac was once again able to sweat and keep himself cooler, meaning that Judy was once again able to enjoy riding her beloved boy! Here’s what Judy said when I spoke to her after his treatment:

“When I last rode Cormac, he was dripping with sweat. I couldn’t believe how much he sweated: between his hind legs, on his neck, under the gullet of the saddle (not just under the saddle blanket).” Judy Christianson, Pony Club Australia National Coaching Accreditation Scheme Level 1 Coach.